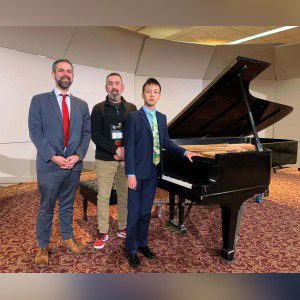 Syosset Sophomore Aaron Liu was honored by the New York State School Music Association (NYSSMA) for his accomplishments as a pianist. He was one of a dozen students throughout the state of New York selected for the 2022 NYSSMA Piano Showcase held in Rochester in early December. At the showcase, Aaron performed Un sospiro by Franz Liszt.

To be chosen to play at this prestigious recital, a student must first achieve a score of 100 on a NYSSMA Level 6, which is the highest level of difficulty that can be performed. Once a student has received this score, they must then submit an audition recording to a panel of musicians who then select the students for the Showcase.