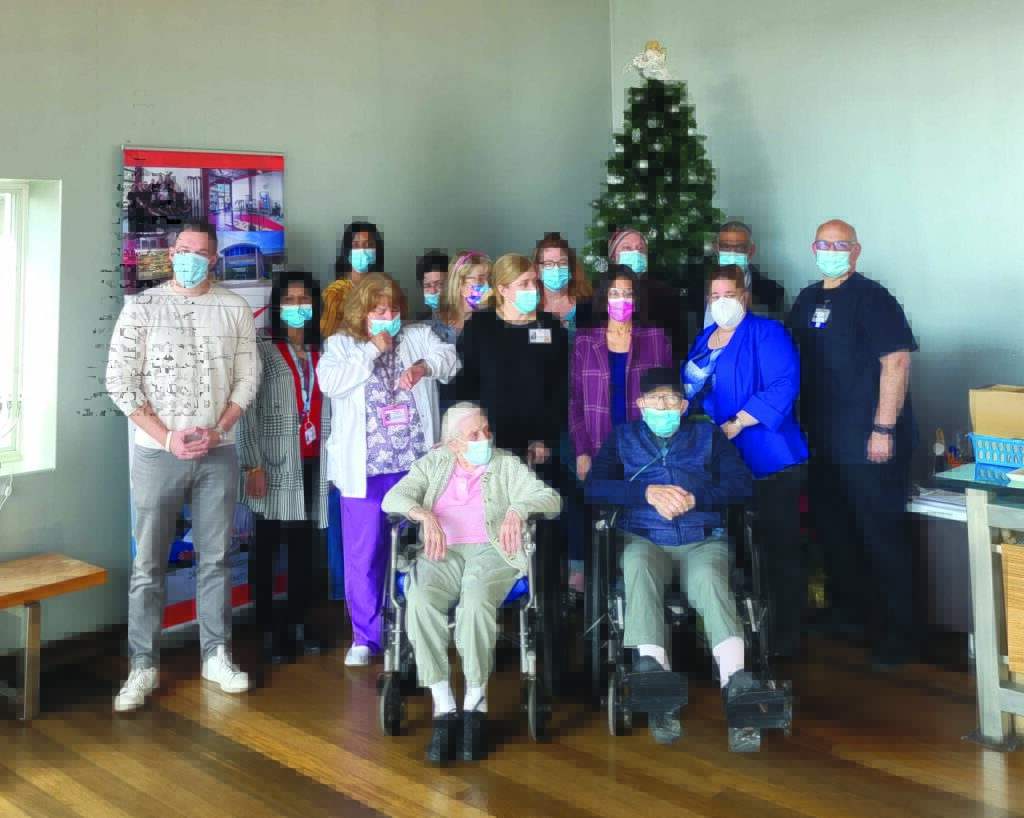 Nassau County Legislator Josh Lafazan, left, at a ceremony to honor healthcare workers at Excel at Woodbury, a nursing and rehabilitation center.

What started as a campaign to become a Syosset Board of Education trustee during his senior year of high school in 2012, followed by success in elections at the school board level and to the Nassau County Legislature representing his home district (the North Shore’s LD-18), will take a new direction — towards the U.S. Capitol – as Syosset’s Joshua A. Lafazan announced his candidacy for United States Congress on Monday, December 13. Lafazan recently won a third term as County Legislator, following five years (2012 through 2017) on the Syosset Central School District’s board of education.

If he is successful in his Congressional run in the 3rd district, to represent parts of Queens, Nassau County and Suffolk County in 2022, Lafazan will be the youngest member of Congress in the Democratic Caucus in Washington, D.C., at still under 30 years old.

In his announcement on Monday, Lafazan said he believes it is time for fresh faces and new voices in Washington, D.C. “If I’m elected to the U.S. Congress, I will be the youngest Democrat there. And if we’ve learned anything from the divisiveness of our politics it’s that people are ready for new and pragmatic voices that can get things done. I’m used to being underestimated. When I ran to be the youngest elected official in New York State, people called me crazy. But I won a seat on the Syosset School Board at age 18. When I took on an entrenched incumbent as a Democrat in a district won by Donald Trump, I was told there was no way I’d win. But I’ve now won that seat three times,” he noted.

Since becoming the youngest elected official in New York State when he won a seat on the Syosset School Board at age 18, Josh has been elected to the Nassau County Legislature three times — in 2017, 2019 and again in the November 2021 election. Over the last four years, Lafazan has passed more bills than any Nassau County Legislator in history. Now he is running for U.S. Congress to represent parts of Nassau, Suffolk, and Queens, for the seat currently occupied by former Nassau County Executive Tom Suozzi.

In his launch video entitled “SEAT” Legislator Lafazan makes the case that in a tough year, keeping New York’s 3rd Congressional district in Democratic hands will be a challenge given the changing electorate on Long Island and the national political climate.

According to his statement this week, Lafazan believes his candidacy “as a Democrat who has a proven record of winning across party lines” will offer Democrats their best chance at holding this seat and thus delivering on the issues that matter most to them.

He pointed to his commitment to lowering taxes, making healthcare more affordable, ending the gun violence and opioid epidemics, advocating for our veterans, and “fighting COVID responsibly by listening to the science.”

On Friday, December 10 Lafazan was part of a special “Thank You” event honoring healthcare heroes assisting older residents in his hometown, at Excel at Woodbury for Nursing & Rehabilitation. At the center, Legislator Lafazan handed out special, official pins presented on behalf of the Nassau County Legislature, for the team of healthcare and rehab center staff, “in honor of their service throughout the pandemic.”

Lafazan was introduced by director Stacey Altman of Excel at Woodbury, as patients at the facility surprised the local healthcare heroes with applause and a chorus of “thank yous” as they were honored by Lafazan, on behalf of all of Nassau County “for their dedication to health, safety, and wellbeing this past year.”

At Monday’s announcement on his Congressional candidacy, Lafazan commented, “I was born and raised in this district. I graduated from our public schools, and have served my community as a volunteer, an advocate, a school board member of Syosset Central School District, and as a Nassau County Legislator. Now I’m running for Congress because in these unprecedented times we need leaders in Washington that are battle-tested and ready to sit down and get to work to solve our toughest challenges.”

“My top priorities are clear: getting property taxes under control, making healthcare more affordable, fixing our crumbling infrastructure, ending the gun violence and opioid epidemics, protecting our environment, and finally ending the global pandemic. These are not poll-tested platitudes but priorities that come from the thousands of conversations I’ve had with residents across this district over the past decade. But none of them can be reality if we don’t keep this seat in Democratic hands. And I’m the pragmatic Democrat who can do that,” he announced.