On Sunday December 17th, the North Shore Synagogue held its annual Hanukkah Happening and Pancake and Latke Breakfast. A signature event on the always busy temple calendar, the breakfast draws several hundred parents and children to a morning 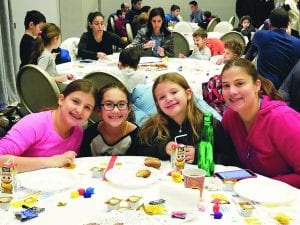 filled with good food, great raffle prizes and good conversation. Congregants had a chance to check out the ballroom, now beautifully reimagined by Carlyle at North Shore. Brotherhood members particularly enjoy this event, arising early to deliver tasty plain and chocolate chip pancakes. Platters of latkes (potato pancakes) were on every table, and ample supplies of donated cupcakes, pastries, juices and other treats were also enjoyed.

Rabbi Rachel Maimin and Cantor Kyle Cotler were on hand to get the festive occasion started by leading the gathering in traditional Hanukkah prayers and songs. A highlight of the Happening is the drawing of raffles for the many toys and other prizes provided by the synagogue’s Brotherhood.  As the drawing approaches, children gather around the prizes holding close their raffle tickets. As the numbers are called big smiles and shouts of “that’s my number” punctuate the air.   Children receive traditional chocolate coins, or “gelt”, and dreidels to take home.  Judging by the broad smiles and bright faces of parents and children, everyone thoroughly enjoyed celebrating this Festival of Lights event.

This year, Senior Rabbi Jaimee Shalhevet called on congregants to donate one night of 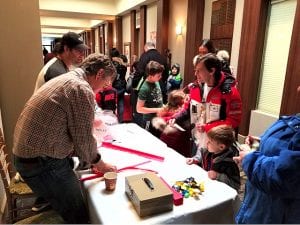 You need to be in it to win it! The raffle for toys and games was a big hit.

Hanukkah to giving gifts, coats or a warm meal to someone in need. Hanukkah, she noted, “Chanukah is about bringing light to a dark world and sharing with each other the miracles of everyday… The miracle of the small army of Maccabees defeating the Assyrian Greek forces, only occurred because ordinary people joined Judah and his brothers, supported them, and believed in them. The miracle of bringing light to our darkened world this year will only occur if WE are that light. So light candles, give gifts, spin the dreidel and spend time with family. And also bring the light of your Hanukkah to someone who lives in the dark.” 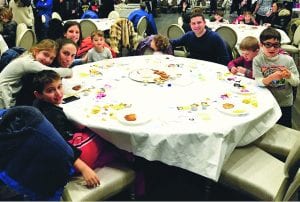 Nothing like some chocolate gelt before the pancakes come! 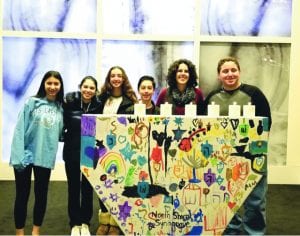 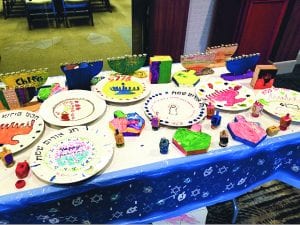