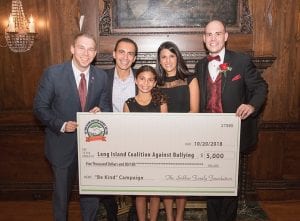 Nassau County Legislator Joshua A. Lafazan (Woodbury) joined the Long Island Coalition Against Bullying (LICAB) to celebrate their achievements in the fight against bullying during the organization’s fifth annual gala on Saturday, Oct. 20.
During the festivities at the Woodside Club in Syosset, Legislator Lafazan presented a Nassau County Citation to LICAB Executive Director Joseph Salamone in recognition of his critical and life-saving work to eradicate the scourge of bullying in Long Island’s schools. LICAB and Salamone were key partners in Legislator Lafazan’s successful push to create www.NassauStopBullying.org, the County’s new bullying prevention resource website.